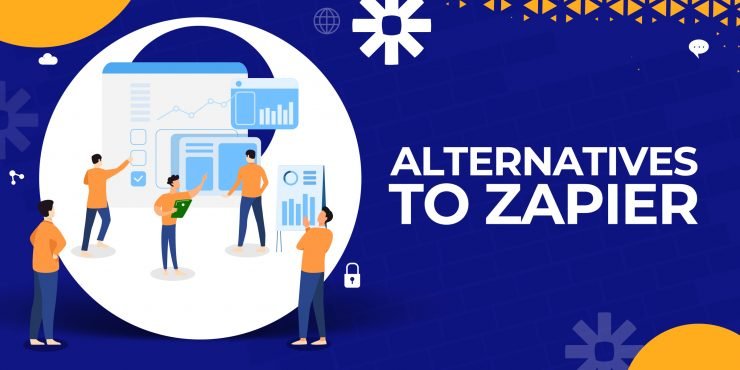 Zapier is arguably the most well-known marketing automation tool on the web. It provides users with a variety of tools to connect online apps and automate workflows. In essence, Zapier simplifies the world of integration. With that being said, Zapier isn't the only web application integration tool on the block.

If Zapier does not work for you or your business, fear not. There are dozens of Zapier alternatives to consider. In this article, we'll highlight three of the top Zapier competitors and provide guidance on when and where each solution makes the most sense.

Want to quickly master Zapier to automate your business?

Why Consider an Alternative to Zapier? 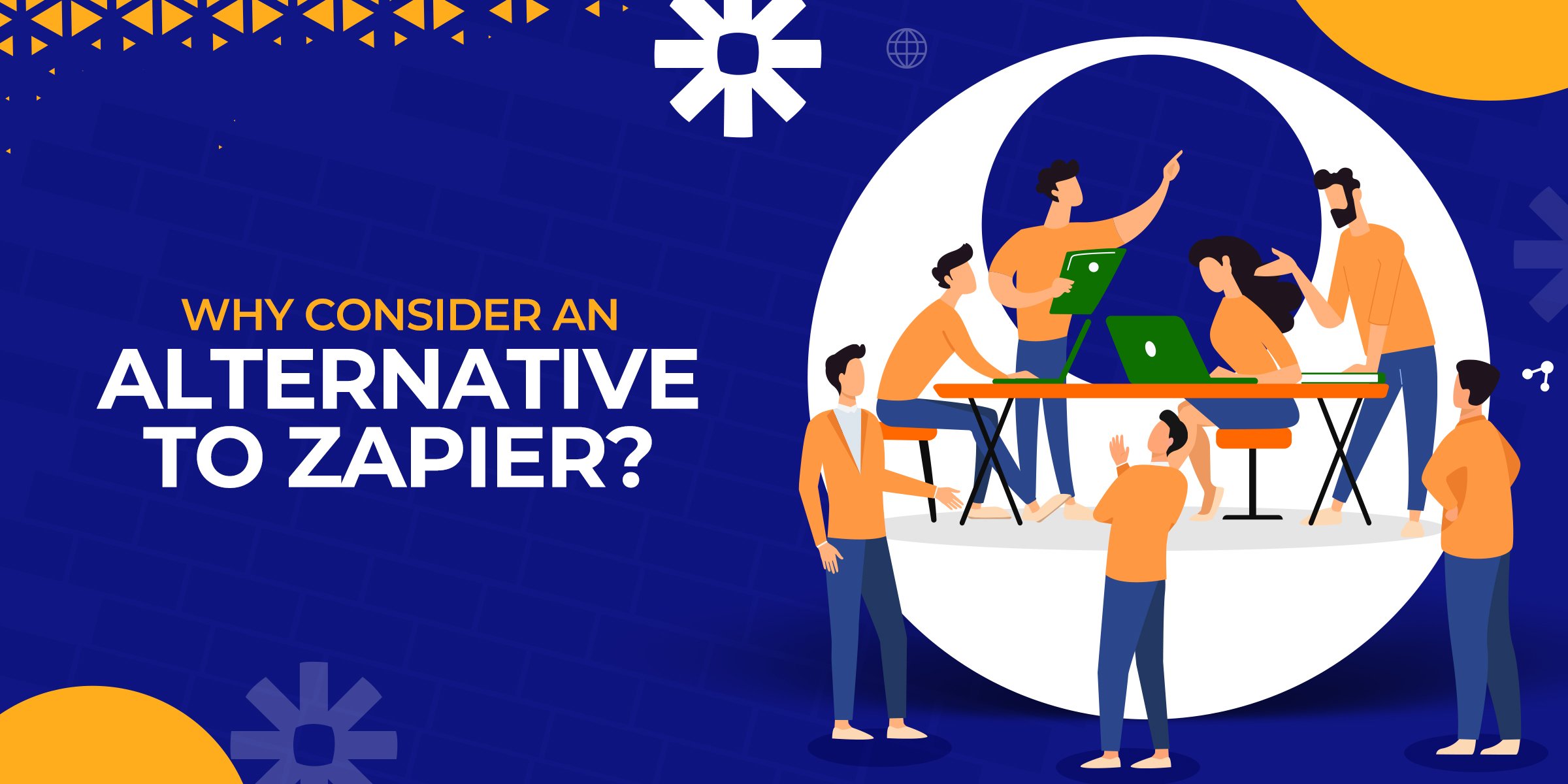 If you read our Zapier review, you'll come to know that we are big fans. It has gotten us out of a few jams and made us look like rock stars to clients. Their large library of integrations is impressive and covers virtually ever major application that you can imagine, and then some.

Although our experience with Zapier has been mostly positive, there have been a few hiccups down the road. Based on our experience, here are some of the primary reasons why you may want to consider an alternative to Zapier.

Zapier has an over 2000 available apps with pre-built integrations, triggers, and actions right of of the box. But not all automations are created equal. You may come to find that Zapier doesn't have a specific integration with one of your favorite apps and that an alternative does. Or possibly it has limited actions, whereas an alternative provides more functionality, lending to less development.

Zapier has a lot of pricing options, and like most services on the planet, you get what you pay for. While Zapier pricing is fairly competitive with other alternatives, it can present scenarios where it becomes significantly more expensive. This is usually the case once you start to accrue more Zaps and build more complex workflows. As you need more Tasks, the cost goes up. This can be cost prohibitive, especially for smaller businesses that are looking to ramp up marketing automation.

Another reason you may want to consider an alternative to Zapier could be because you aren't actually working on building the automations. Maybe you have an existing developer or team that prefers to use one of the other available online automation tools out there. While easy to use, especially from a developer standpoint, there is a learning curve that comes with any new tool. So, if your developer already has familiarity with a different tool, it may be worth looking into building from the platform. This will cut down on development costs and increase speed to deployment.

The more you pay, the lower that polling interval gets. The problem is that as you need data transfer to happen more quickly, the price goes up. Also, if you need to facilitate real-time data transfer, Zapier, or any of the major alternatives, are likely not going to be a good solution for you. You'll likely need to set up your own server resources for this.

When it comes to support, Zapier is virtually non-existent. Unless, you pay for it with a minimum of a team plan. This isn't ideal if you're a beginner and don't have a big budget to hire a Zapier expert.

Troubleshooting Zapier can take a lot of time, especially if you're a novice or if you have a lot of Zaps built out. There are a handful of common Zapier problems that you could try and tackle to keep yourself from migrating. But, if you're constantly running into the same issues, then it may be time to consider making a switch.

If you’re looking to save money online automation tools that connects your favorite apps, there are lots of options out there. The following are the best alternatives to Zapier:

Supporting both simple and complex automation workflows, Integromat is one of the most powerful Zapier alternatives. It has many useful features. but the most distinctive are its visual editor and the fusion of code elements like HTTP/SOAP and JSON, which grant tech-savvy users greater automation capabilities.

Integromat offers a comprehensive free plan for those who are starting out, and has positioned itself as a great alternative to Zapier from a cost standpoint. The only major downside is that the learning curve is a little bigger.

Best bang for your buck

Second on our list of best alternatives to Zapier is Automate.io. They've helped over 30,000 organizations worldwide automate processes. Compared to Zapier, Automate.io provides a drag-and-drop platform. This allows you to develop complex workflows spanning across multiple apps, saving time and money.

Another great benefit of using Automate.io is the sheer number of actions users get access to monthly. One of the biggest concerns with Zapier comes with the cost increase as you add more “Tasks”. The Zapier Professional Plan, which currently sits at $49 provides users with 2,000 tasks each month. In comparison, Automate.io provides 10,000 actions for $39/month.

We can't understate the value you get with Automate.io, especially for marketers looking to automate redundant processes. Using Automate.io instead of Zapier when building something like an email drip campaign, where there are lots of steps, provides additional cost savings that makes ROI metrics look even better!

The only major drawback with using Automate.io over Zapier is the available apps and integrations. They cover a lot of the major apps, but once you start digging into niche software, you may have a tough time finding existing triggers and actions. This will lead to having to go the custom route.

Workato is like Zapier on steroids. It's primarily geared for enterprises and large corporations to run automation workflows (called “recipes”) across multiple departments to help shape the ideal workplace. They are one of the must trusted providers in the automation space.

The big downside to Workato comes with the price. Their plans start at $10,000/year, so this is not a great option for small businesses and personal automation projects. A massive advantage over Zapier comes with enterprise-level features like unlimited apps and connections, robust security and governance, and connectivity to both cloud and on-prem servers.

Best for Microsoft based companies

Previously called Flow, Power Automate is an interesting option for Microsoft loyalists. If you are using Microsoft's suite of products like Office 365, OneDrive, OneNote, Teams, you’ll be able to connect everything with a single authentication.

Microsoft Power Automate has robotic process automation (RPA), a form of business process automation that relies on bots and artificial intelligence. It also provides you with a way to create as many automated workflows as you need. This is even available on their cheapest plan ($15/month).

Like some other Zapier alternatives, Microsoft Power Automate falls short when it comes to the number of apps and services it will allow you to connect with. At the end of the day, it's a popular solution based on the Microsoft name and is worth considering if you want to keep all of your technology solutions under one hood.

IFTTT (aka “if this then that”) is a user-friendly automation tool that connects apps using simple conditional statements. These workflows, called “applets”, range from running your smart home and social media applications to integrating with digital voice assistants.

This Zapier alternative has a very intuitive interface, yet it's simple enough to use to build out basic automations. However, things are a bit limited once you try to get into more complex workflows. And if an applet isn't already available, creating one from scratch isn't as easy as it is with Zapier and other alternatives.

When all else fails…

If all else fails, the last option to consider for connecting web applications is the old-fashioned route: hire a developer and build a custom script via open APIs.

While this is seemingly not ideal because of increased labor costs, there are some long-term advantages to going the custom route.

For one, you'll have more control of the server environment, and if you manage the server yourself, you'll be able to configure it do whatever you want. This is an important consideration for larger businesses that are looking to facilitate loads of data in real-time.

Virtually all of the best Zapier alternatives are capped at how fast they can check for updates. If you build a custom environment , you can apply dedicated resources to each of your apps and prioritize updates as needed. Remember, time is money and every second matters.

Secondly, a competent programmer can maximize all of the use cases of an Application Programming Interface (API). When using Zapier, or any of the alternatives, you are often getting value out of their pre-built actions and triggers. However, these are limited to just the most popular use cases. Something like Twilio, for example, has two actions on Zapier:

Whereas an alternative, like Integromat, has a few more:

But that's not even a full scope of EVERYTHING you can do with Twilio's API.

Take a look at their extensive API documentation.

Warning: If you're not a developer, the above docs might look like a complete foreign language to you. And that's where tools like Zapier and respective alternatives add a lot of value. But up to a point.

In essence, you could use Twilio's API to automate 1000s of different processes, some of which can be done in Zapier and alternatives. Some of which cannot.

Zapier is a great tool, but comes with some downsides and limitations. I've personally used a hybrid of Zapier, Zapier alternatives, and custom development projects to connect apps and automate processes. There's a use case for all of the above.

The best way to make a decision is to identify where your pain points are first. Where are your biggest time drains? Search the list of alternatives here and see if the apps where you're wasting a lot of time doing repetitive tasks are have pre-existing connections built. Then, evaluate the user interface and workflow builders. Ultimately, there is some nature of user preference that will go into your decision making process.

From there, start out small and scale up. Assess your monthly expenses and always pay attention to “how many tasks” you're being billed for. That's where things can add up quick, eliminating the financial benefit that you would expect from decreased labor.

How to Find and Hire a Zapier Expert